FONDA — A two-story home in Fonda was destroyed in a large fire on Sunday morning, and two neighboring homes were damaged. 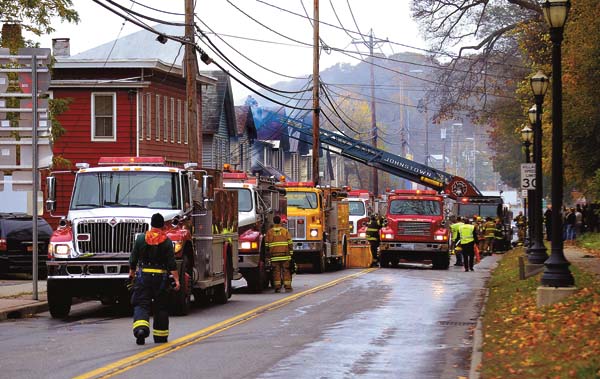 The Johnstown Fire Department’s ladder truck was utilized to reach hot spots in the rafters of 22 Main Street at a mutual aide fire that damaged homes at 22, 24 and 26 Main Street in Fonda Sunday. The mutual aide fire was responded to by companies from Mohawk, Tribes Hill, Fultonville, Town of Glen, Rural Grove, Canajoharie, Berkshire and Johnstown along with the Fulton County Civil Defense/Fire coordinators Office, Montgomery County NY Emergency Management, New York State Pole and Montgomery County Sheriffs office, while fire departments from Fort Plain, Fort Johnson, Town of Florida and Pleasant Square were on standby. (The Leader-Herald/James A. Ellis)

Seven fire departments which included, Fultonville, town of Glen, Tribes Hill, Johnstown, Canajoharie, Rural Grove and Berkshire fire departments all responded to the fire at 24 E. Main St. in Fonda at about 11:24 a.m.

“The house was pretty much destroyed,” said Mohawk Fire Department Chief Stan Mitchell. “It might have to be torn down.”

The two neighboring homes that had damage due to the fire were 22 E. Main St. and 26 E. Main St. There was also a car parked in the driveway between 22 E. Main and 24 E. Main that sustained considerable damage.

Mitchell said he did not speak to any of the residents living in the home, but there was one occupant upstairs and maybe two downstairs. He said they were out of the burning home at the scene and were not injured.

However, one of Mohawk Fire Department’s captains was sent to the emergency room due to smoke inhalation when he went inside the neighboring home, 22 E. Main St., to rescue three dogs that were inside the home. Mitchell would not release name of the captain who was sent to the hospital.

Mitchell said the fire captain has been released from the hospital and showed up the house this morning to help with the clean-up.

“We believe the cause was electrical,” Mitchell said.

He said he isn’t sure exactly where in the house the electrical problem occurred.

For further information or to sign up to be part of the Smoke Alarm Installation Project, please contact Deb Finkle (518) 857-6708.